Did I mention she graduated? 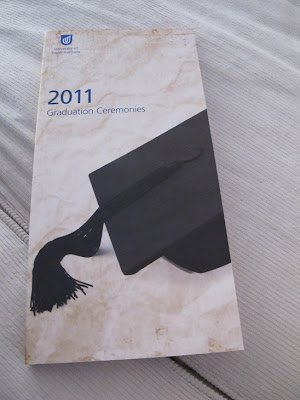 On Monday I went for a drive. To Adelaide. And this is the reason why. Miss 20 graduated this week. When she was finishing up her degree at the end of last year she kept saying, "Have I mentioned that I'm graduating?" She was pretty excited then and three or four months later at her graduation she was really happy. (I'm talking constant smiles!) 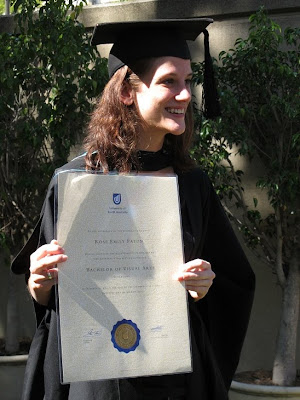 Of course, you might think that her smiles were because she was leaving university behind. No. Not at all. She was back at uni the day after her graduation. That's because she has been saying to us for the last two months, "Did I mention that I got into honours?" 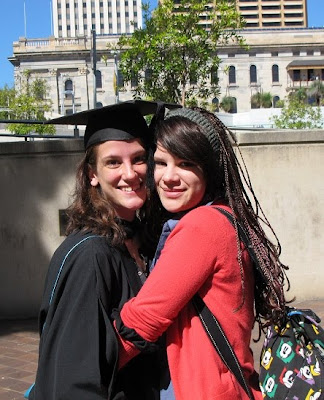 Here she is with her sister Miss 18, who wagged a couple of lectures to be at the graduation so I could take this photo. 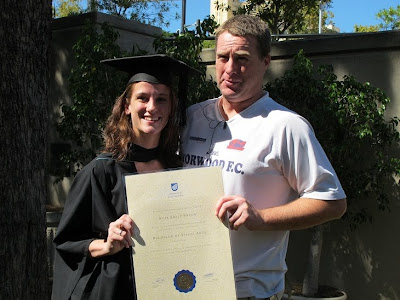 And a photo with her bloke. (Who is pulling a funny face! Pretty sure he was telling a joke at the time.) She says she wouldn't have graduated without his encouragement. It's so cool when your children become adults and they find others out there in the world who want to cheer them on. Of course, we haven't stopped cheering for her either! Well done Rosie!!!
Posted by Kris at 17:28

Congratulations!! Nothing beats the elation you feel on graduating after such a hard slog. Unless it's getting into honours for more hard slog.

Congratulations! How proud you must be! Enjoy your weekend.

Congratulations Rose ! And to you too Kris for bringing such a clever person into the world and encouraging and nurturing her to do wonderful things.

You must be so proud!

That is a major achievement! Congratulations!

Oh my goodness! She was tiny just a minute ago - doing guinea pigs and cabbage patch dolls! She looks so happy - what more could you ask for?

Now, I'm just guessing, but I bet there's a very proud mom and dad that are all smiles about this, too. Congrats to you as well. :o)