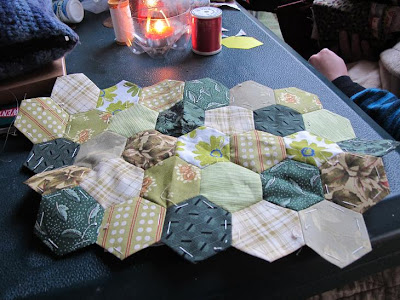 We moved to Melbourne, but we didn't have a house to move to so we have been staying in a caravan park in our tents. My Bradley has started work and is enjoying it. I have been lazing around with the kids. Playing games and playing games. Oh. And stitching hexies that I bought from Jane (the patchwork apple) in her closing down sale. You can see them above. January is nearly over and they are the only stitching I have done! It has been a lean month craftwise. Today has been a good day though because we got a house! We move in a week so goodbye tent!
Posted by Kris at 19:57 12 comments:

Over the weekend we moved to Melbourne. (Finally!) It's quite strange being "between" houses. We are staying in a caravan park in our tent. (The kids think we are on holidays, but it feels a tad "homeless" to me!) Chookyblue has started up the Snappy Friends challenges again and my caravan park has "bark" so I am off and running. 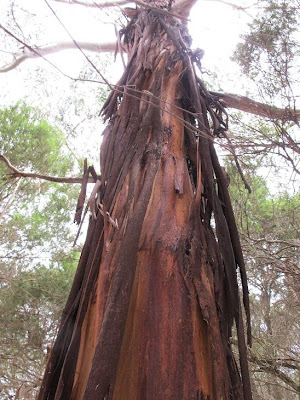 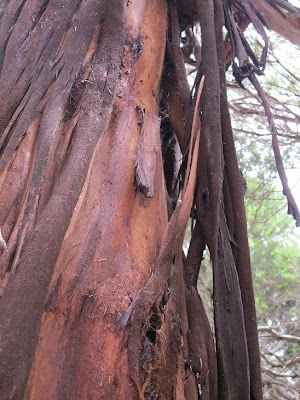 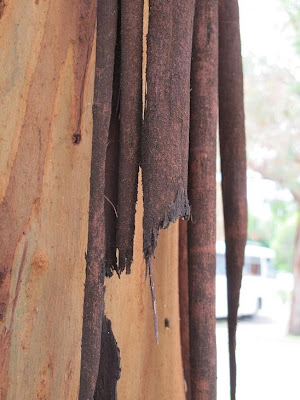 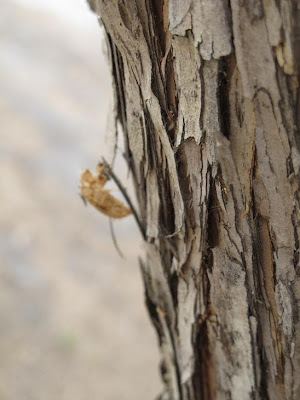 The gum trees with all the bark hanging off them are amazing. Birds love these trees because the hanging bark offers a wealth of homes for insect life. The last photo shows the casing of an insect of some description attached to the bark.
Posted by Kris at 13:52 11 comments: 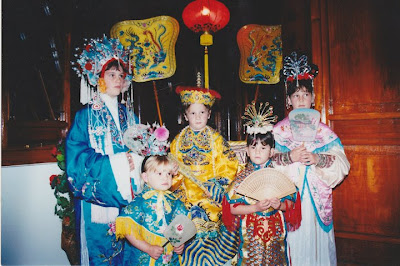 My kids at the Chinese Gardens in Darling Harbour in Sydney
Picklesticks on the left, Miss 18, Mr 22, Miss 20 and Miss 24 on the end.

I have been meaning to join in with Quilting in My Pajamas Favourite things Friday since she began, but never quite got there. Right now I am supposed to be moving to Melbourne (Never mind that the road to Melbourne is flooded as we speak and there is no way we could have driven there today) but I have been sick and have held up the moving process single handed. I have spent a week in bed with temperatures of 39C plus and am not back on my feet yet. So, moving is postponed a bit. (Next week?)

My favourite thing this week is family holidays. We have had so much fun! Once we move to Melbourne only one of those little children in the photo above will be living with us. Seems strange to be abandoning such little children! Of course, then I think that this photo was taken about 17 years ago and I feel O.L.D. We have travelled to Brisbane, Sydney, Alice Springs, and everywhere inbetween. Exciting adventures!
Posted by Kris at 09:11 13 comments:

It must be boxing day! 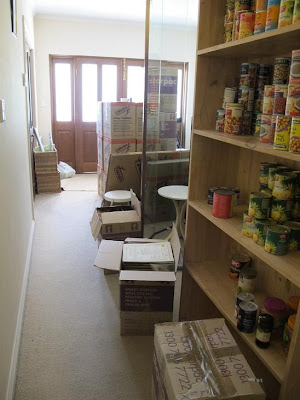 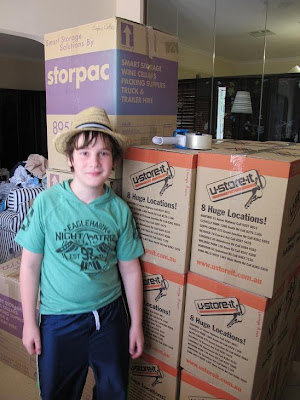 Lots of boxes were filled today. Everyone helped. Everyone from Mr 10 through to my Bradley. We have been in this house for 18 months now and Mr 10 has grown so much in that time. He is hoping that he is gearing up for a Paton boy stretch. Both of his brothers began the stretch at 12 and then were taller than the 6 foot Bradley when they were 13. Mr 22 is 6'4" and Mr 16 is 6'5". I'm not sure how tall Mr 10 hopes he will grow. I think he will be disappointed if he is not taller than his Dad. But we will see. I tell him that we are all different and even though his height is already prescribed by his DNA none of us know what that height will be until he finishes growing. Anyway, a good day of packing. More tomorrow!
Posted by Kris at 23:47 12 comments: 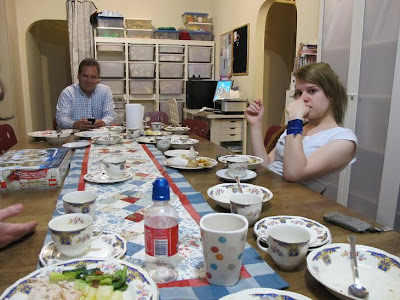 One of my goals for 2010 was to make some things for myself, and for my family. If you came into my house before then you wouldn't necessarily know that I was a quilter. I had made a lot of things, but had mostly given them away. Not like Loz's house and Claire's house. They have the most beautiful quilty homes. I'm sure most of you do because I see your homes on your blogs. As I was busy considering some goals for 2011 (a bit slow I know, but I will get there) I came across this photo. I love it! My table with the runner I made and the china I use every day that I collected from three different op shops! It makes me so happy to use this china every day. I had to convince my Bradley that it was a good idea. He was worried that since I love it so much it was too precious to use every day. We even put it in the dishwasher! So, some of my goals of 2010 were accomplished. It must have been a pretty good year!
Posted by Kris at 23:05 8 comments: 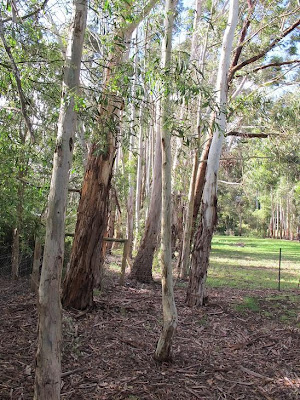 Gum trees at Hahndorf
January. Another year has begun. Hard to believe because I don't think I'm quite used to writing 2010 yet and it's over! 2010 was a fairly uneventful year for me (Perhaps not. The birth of a granddaughter and the wedding of a son have just sprung to mind.) and 2011 looks to be a little more action packed. We are starting with a move in January. Where too? Not sure yet. Have to pack and move though! I'm sure we will find something! - Gosh! That's very glass half full of me. Perhaps that's a confidence I'm not actually feeling in real life. The "blog me" is just a tad superhero I think. Able to leap tall buildings in a single bound and overcome crippling doubts in a single post! So, I'm packing. It's three weeks till moving day.

I am also excited about 2011 because I am going to do more art quilting. This is something I have longed to do for years now, but was too afraid to try. (What's with that whole scaredy cat thing? Why do we do that? It's so crippling!) I have discovered that if I want to produce some art I need more visual input. More inspiration. I do get plenty of input here on the internet (that's my excuse for all this surfing and I'm sticking to it!), but I think I need to take more photographs and see more exhibitions. I haven't produced a comprehensive list of "want to"s for 2011 yet. I'm still thinking about it. I have loved reading everyone's 2010 wrap ups and their 2011 lists. It has been inspiring!

Oh. And this is my 600th post. I thought I would hit this milestone in 2010, but a case of uninspireditis kept me from posting much in December. I had a bit of a slump in December. Too tired and too headachey to be too cheerful I think. I have had a pretty good week this week though. Glad to be finished with Christmas (Bah Humbug!) and with two kids away holidaying in Sydney (Misses 24 and 18) life is simpler. It's a numbers thing. Much easier to be fewer than more, it's not a reflection of the kids who are away! We have had a fun week with the three youngest kids left at home. Just the five of us.
Posted by Kris at 19:52 16 comments: