This getting older thing is interesting. Last month my Bradley finally gave in to all the cajoling and went to the optometrist. He has been wearing chemist shop glasses for some years now for reading (we both have) but all of us at home were sure he was seeing less and less over all. He was most surprised when the optometrist gave him a prescription for both reading glasses and long distance glasses and suggested he get multifocals. He came back to the office with the said prescription in hand, denying the need to wear glasses full-time and throughly aghast at the price of multifocals. Of course, I took him back there the next day and we chose frames for his new glasses. We picked them up a week later and he loves them. He is still being surprised by how much he can see now. 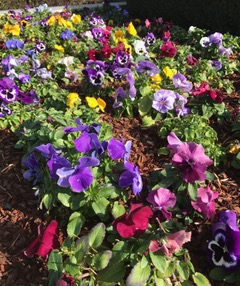 My Bradley was resistant to getting glasses, but he is really finding them helpful. Earlier this week when he was out walking he came across some guys trying to break into a car. His first thought was to dissuade them from breaking in (He's a salesman. He spends all day trying to persuade people!) which, moments after he started speaking, suddenly seemed like a very bad idea. They were not to happy with his intervention and began to approach him until one of them noticed that he had a dog with him. The presence of our dog did far more to persuade the men to change their ideas than my Bradley had been able to. As they drove off he was able to get their number plate which was helpful when he made a police report. When he recounted the story to us later we all thought that he wouldn't have been able to see the number plate clearly had he not got glasses.

Had you asked him a month ago whether he had trouble seeing things in the distance he would have said no. And that's the thing with getting older. It creeps up on you. You hardly notice it at all until one day you look in the mirror and you're old.