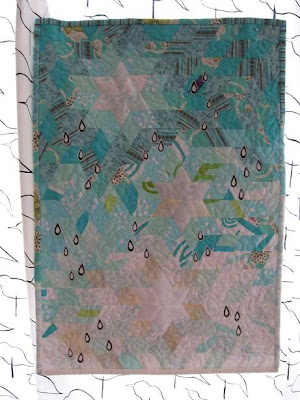 This is the last diamond post. Hmm, I see a bunch of you heaving a sigh of relief, well, I did too! The finished wallhanging is shown above. It is my monochromatic quilt for the 4 season quilt swap, so I can't tell you who I just posted it to. All I can say is that it is now in the hands of Australia Post. (That great bunch of people who exist only to cheer bloggers up. They're terrific!) I was very pleased with it when I had finished and any little problems I had had with it were resolved with the quilting. I quilted and bound it first and then I raw edge appliqued the raindrops on. I like the way the raindrops turned out. If you want to see any of the other monochromatic quilts go have a look at the 4SQS flickr group. 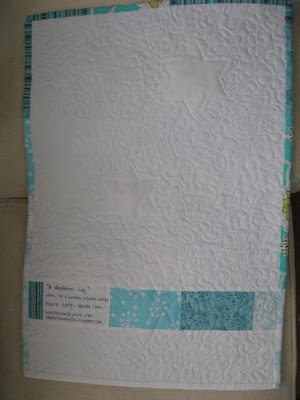 The back, showing the quilting. Gosh! It looks like someone else's blog. (I haven't finished a quilt for such a long time. It's a nice feeling, think I might do it again soon!) Now, for the story. Once upon a time, (long before I knew anything about blogs) my Bradley had some work to do that involved him travelling to four different states. He thought that the best way to do this would be to drive and camp and take the whole family with him. We were fortunate enough to be homeschooling our six children and decided to just take off and go. (Mr 14 had just turned 2. He was so cute! Sorry Mr 14.) One morning when we woke up Mr 14(2) was lying in my bed with me and we were looking at the ceiling of our tent. He said, "Mummy, stars!" and pointed to the ceiling. I looked and saw the stars, and was confused. There was a tarpaulin over the top of the tent. How could we see the stars through the tarpaulin? Hang on, it was morning, we shouldn't be seeing stars! As my mind tried to process the seemingly impossible sight of stars on the ceiling of our tent, I began to realise that what we were seeing was not stars, but ice crystals glinting by torch light. Did I mention that it was cold? Who goes camping in winter? Oh. That would be us! 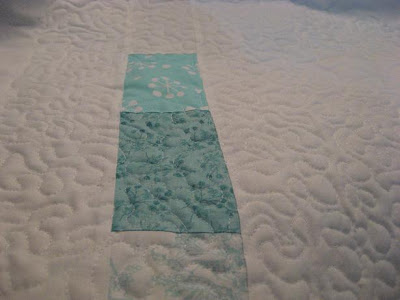 We continued travelling and the kids got pretty excited because everywhere we stopped people were talking about the possiblity of snow. None of the kids had ever seen snow before. (Or I, for that matter) We eventually ended up in a freezing cold place on Mrs 24's birthday. There was much talk about the predicted snow. We went to visit a local landmark and tourist attraction hoping to see the snow. (We had heard on the radio that it was snowing at this place.) We were disappointed because there was no snow, but decided to have a touristy look anyway. Bradley and the older children decided to have a look around this landmark whilst I gave Mr 2 a breastfeed. (The places I have sat and breastfed babies and children!) They were gone for quite a while and when they came back were very excited. Apparently as they had climbed up this landmark the rain had become snow. At the top it was snowing, but down on the ground level (where I was) it was raining. That is what my 4SQS quilt depicts. I hope my swapee likes the quilt!
Posted by Kris at 15:41

I like this quilt a lot! Not to mention the way the colors of the biding fitting in. You did a great job on this on. Why do you think we get tired of it, I don't.. I think it is fun to see the different steps in the process! DO like the story behind it. Did you ever see snow afterwards?
By the way, how is your house hunting going?

It is gorgeous...your swappartner wil love it ..whoever she is!!! Or maybe he I dont know..:o)

Wow! You have done an amazing job! It is just stunning-what a lucky swap partner!

Your swapee will love the quilt to pieces. It’s gorgeous! The quilting, the raindrops, the colours, you did a wonderful job!! And the story makes it even more beautiful!

love the quilt, great story behind it, and I love the way you did the binding, too.

It's beautiful Kris -- lucky, lucky recipient. And I love it when a quilt has a story behind it!

I think it really turned out cute! I love that it is monochromatic.

WOW.WOW.WOW.!!!
Is all I can say at this Point...Love the way you have Finished this...one Lucky Girl who is getting this...
Congratulations.
cheers

That is a gorgeous quilt and I just love your story about the snow. You have a fabulous family.

A Spoonful Of Sugar said...

Love the story behind the quilt - it is gorgeous!

Great quilt Kris, I like that you post about it in stages, it's nice to follow along as you make it. I can remember going camping and it was raining (condensation) inside the tent, I guess it wasn't cold enough for the ice crystals to form that time.
Pip

that quilt is stunning...a real piece of art.Filled with meaning, significance and beauty. Your swap partner is sure to treasure it.

I love you quilt...beautiful. I also love the story that goes with it!

Goodness me! I'm so happy that your quilt has come to live with me - so lucky, since it's so beautiful! thanks so much :)