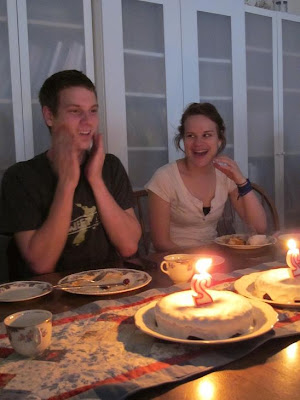 It's December and it's nearly Christmas! It was Mr 21's birthday and we had a party. (It never seems that Christmas is near until after his birthday) This is Mr 22 with his sister Miss 18. His darling wife was interstate for work so we had the pleasure of his company for his birthday. (She is a hard working woman!) Mrs 26 (picklesticks) baked two triple ginger ginger cakes which were delicious! This year has really flown by and here we are at the end of it already! 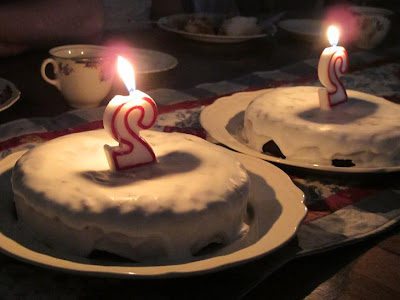 I cannot believe it's almost the end of the year. Thisis how people wake up one day and think "Excuse me how could I possibly be 70?"

Happy Birthday, Mister 22! :):)
Our Ragan has a b-day coming up on the 5th. I swore we would always wait to have Christmas until after her b-day so as to not minimize her day. But, she started asking for all the decorations to be up. I think she secretly believed them all to be for her day! Now it's her idea to get them all out the day after Thanksgiving.
Hope all is going well with you....are you enjoying the summer weather?
oxox
Jo-Anne

Happy birthday to Mr22! Those ginger cakes look mighty yummy! I feel the same way about Christmas - it's almost here when we celebrate Jason's birthday on the 15th.