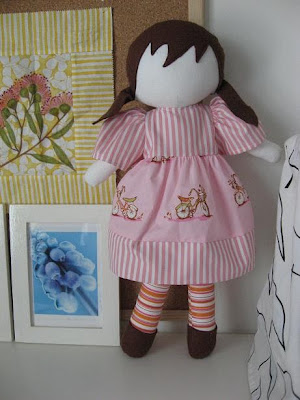 January flew by this year, and February is doing the same thing! Hopefully I will post a photo of the completed give away bag tonight. This is something else I have been working on this week. In fact it is this doll that has set me pondering about how time flies. I started this doll somewhere near the end of 2007. I remember sewing her head on in October of that year, but her head was all wobbly and I gave up. I am not a softie maker, but I was inspired by all of my children (who all make the most wonderful softies!) and some sewing successes I had in August 2007. I decided that I had it in me to design a doll and make her, despite never having done it before. The last couple of weeks I have been sorting through my crafting things (a legacy of changing rooms and me moving to the room without storage - don't worry, my Bradley took me to Ikea to remedy the storage problem.) and setting up my sewing room. You can see a little of my desk in the doll photo. Well, I found the doll with her ridiculous wobbly head and decided to finish her off. Miss 22 watched me as I took her head off and commented that I was halfway to serial killerdom. I guess she took my "finish her off" comment a different way! Now her head isn't wobbly anymore and I even made her some clothes. She isn't an Amish doll (faceless) so she's not quite finished yet, but I'm working on it. I have learnt a lot from making her and may just become a softie maker after all. Check in later for some bag updates!

Email ThisBlogThis!Share to TwitterShare to FacebookShare to Pinterest
Labels: doll, give away, softies

Well I love her as she is!

Planning on making more???? They are georgeous.

I love her dress it's so pretty. I remember seeing this doll in your sewing room a little while ago and we talked about what you were going to do with the rest of her i.e. clothing etc.....well you finally did it and she looks gorgeous. You could just leave her face as is...I think she looks fine......even if she isn't an Amish doll. She is too cute. I so think you should try making another one or even something else ...you are good at it.

She;s very cute...I kind of like her without a face!

She is very cute and I love your fresh jelly roll.

She is just adorable and I like her hair. :)

I think she turned out so sweet. And cute in pink too.

Your doll is pretty. I'm not very good at softies either, though I haven't stopped trying. I have one on the table right now whose leg needs to get sewn on. I like how you did her hair.

I have a couple of softies lying around that are half finished. I am quite motivated when I start them and then if things don't go right, or they don't come out how I envisioned them, I end up abandoning them until they speak to me again (so to speak). The face is the hardest part sometimes, but either way I'm sure she will look lovely.
take care
Pip

She is so cute!
Kind regards,